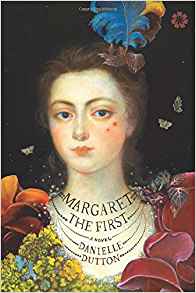 This is a rather odd little book. Margaret the First is Margaret Cavendish, a duchess that lived during the British Civil War and Restoration. A rather fey child, she became a lady in waiting to the Queen, and stayed such during the Queen’s court in exile. At court she met and married William Cavendish, a man 30 years her senior. It was an enduring love match.

She became noted for her style of dress- she would design her own dresses, taking inspiration from the mossy forest floor or the like. During the time in the Low Countries, she met many noted thinkers, scientists, writers, and philosophers. When they were able to return to London, where there were books written in English, she became an autodidact, reading voraciously. She wrote almost ceaselessly- plays, poems, essays, and a novel or two- but of course she was not widely read; what could a woman write that could be of consequence, after all?

Margaret was a conundrum. She upstaged the first showing of her husband’s play by showing up at the theater topless, and stated that what she wanted was fame. Her conversation- or, more apt, her holdings forth- swung from physics to fairies. She wrote what might be considered the first science fiction novel, and was the first woman (*only* woman for 200 years) invited to a meeting of the Royal Society of London. She ranged from horribly shy to never shutting up. She is almost portrayed as bipolor in this novel, ranging from deep lows to frantic highs.

This is not the kind of historical fiction where the history takes precedence. The focus is on Margaret, with history happening around her in the background. At only 160 pages and with fast paced writing, the book can be read in a few hours. While not my favorite book in the world- I’d give it four stars out of five- it was a few hours well spent.

This in no way influenced my review.
Posted by Laurie Brown at 11:58 AM