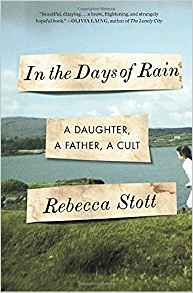 Rebecca Stott was born into a cult. So was her father. He was a high ranking official in the church called the Exclusive Brethren. An End of Times cult, they felt they had to purify themselves so they would be bodily taken up when the Rapture occurred. The rules became more restrictive through the years; not only did they restrict all information sources to the Bible and their own publications, but they limited contact with outsiders to almost nothing. Women were to be seen and not heard. Then they started attacking their own members, trying to force confessions of sin from them; they removed the victim’s family members from the house and isolated them. Some committed suicide. Businesses and jobs were lost.

Growing up in this cult, Stott lived a life of fear, which seems to have been common among members. Fear that she could not live up to the strict standards of the cult- which of course she equated with the strict standards of God. But when things got too bad (the church leader, J.T. Junior, who was instituting all these rules, emerged as an alcoholic and blatant womanizer, going so far as to be fondling women’s breasts in front of others), her father broke with the church. He was the last member to have been allowed to go to college and had read ‘worldly’ books. Sadly, his education did not save him from folly; he became a chronic gambler and womanizer and left his wife trying to provide for the family.

The idea for the book began when her father, Roger, found out he was dying. He wanted help in finishing his autobiography, which he had started years before. Rebecca set out to record their talking sessions, and found that while he could talk about his early life, her father could not get past the years when he, as part of the Brethren, had led interrogations of members. Something in his mind could never get past what he had done, no matter how he tried to reconcile the person who had done that with the person who had sought to do the right thing.

One part of the book tells us about the Brethren movement itself; another about her family’s part in it. Then there is her father’s life; and then her own, as she sought to outgrow the philosophy she’d grown up with. While a lot of the writing is very good, it is in places disjointed, switching between her father’s life and hers. I found myself confused in places. I also found myself getting bored with the details of the Brethren’s history. While I feel this book is important to understanding how cults work and how people become coerced and dependent in them, I feel it could have used a lot more editing. 3.5 stars out of five.

This book was given to me free by the Amazon Vine program in return for an unbiased review.

Neither of these things influenced my review.
Posted by Laurie Brown at 1:30 PM