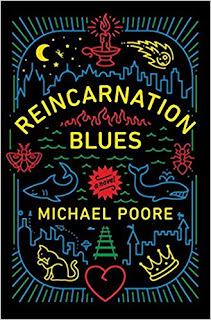 In this tale, souls get 10,000 chances to reach perfection. If they achieve this, they go into the great cosmic soul forever; bliss, but with no individuality. If they fail, they are obliterated forever. Most people manage it in significantly fewer than 10,000 lives. Not Milo, though- Milo is at 9,995 and it’s not looking promising. Milo knows this- at least between lives, he does. During the resting period between lives, a soul is fully conscious of all their lives. In Milo’s case, two spirits (deities? Avatars?), Ma and Nan, aid (mostly by harassing) his journey to perfection. Also with him between lives is one of the many avatars of death, Suzie. Suzie and Milo are in love. They want to find a way to stay together. Also, Suzie wants to stop being death and open a candle shop.

We follow Milo through a number of his lives. Lives can be as anything; trees, kings, cats, pirates, slugs, slaves, male, female, poor, rich, whatever. He comes *close* to perfection, but somehow always screws it up at the end. The lives are pretty interesting; short tales of near perfection in a prison, turning around the human race on a different prison world where the Water Cartels run everything; and tiny tales, a page long or less, of marching in Selma Ala., and hiding a cache of Polish pornography from the Nazis. Some tales of being not so nice a person. He also has adventures between lives, too- the afterlife is quite a busy place. The whole book is a collection of short stories, with Milo (he tends to keep that name throughout) as the star of them all. Some parts are horrific, some are very funny- his style reminds me of Christopher Moore (and, at times, of certain periods of Robert Heinlein’s work)- but for some reason, Milo never seems to take anything seriously. It made it a little difficult for me to really feel for him. Suzie isn’t around enough to make a real connection with her. I really enjoyed the book- it’s a lot of fun!- but for some reason I just can’t make it five stars. Four stars out of five.

neither of these things influenced my review.