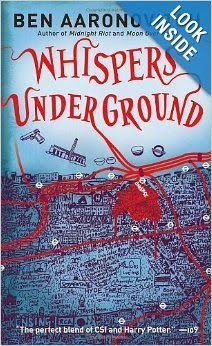 London Police Constable Peter Grant returns for the third volume of this urban fantasy series with a well connected American murder victim that has a trace of magic attached to him. The complex plot weaves together a born again Christian FBI agent who does not like the idea of magic, some very special pottery, a teenaged girl who is catching on to the whole magic thing all too quickly, an underground world and the larger story arc of the deadly rogue magician- all told in the funny, snarky voice of Grant. This volume gets back to the frantic pace that the first in the series had.

I did find myself getting lost at times because of the large number of characters, unable to remember if this or that person was FBI, London police, or counter terrorism. Thankfully the main characters have had three books to flesh out their parts and there is no forgetting them! Character is one of the things that shines in this series; no one is a caricature and everyone is well drawn. London itself is so thoroughly described, history and all, that the city almost becomes a character in its own right. The other strong suite is the humor; a dry, witty way of describing things and great banter between the main characters. I hope this series goes on for many books!

The above is an affiliate link. If you click on it and buy something, Amazon will give me a few cents. This in no way affected my review.
Posted by Laurie Brown at 5:24 PM