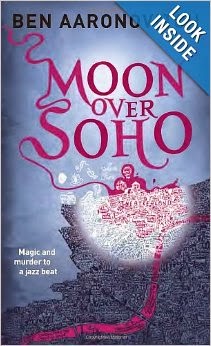 In his second outing, young Constable Peter Grant of London is now a magical apprentice and member of the branch of the police that deals with supernatural crimes and events. In this book, jazz musicians are dying off suddenly, with a trace of magic on them- the strains of a jazz song popular in the 1940s. The story brings Grant’s father, a famous jazz musician, into the story. There is also a monster on the loose that is munching genitals- and not in the good way.

This book has a bit slower pace than the first one, which allows for more character development- I enjoyed finding out about Grant’s parents. Grant spends time learning more about magic and having an extremely physical relationship with a mysterious woman. His best friend, hideously injuring at the end of the first book, is learning magic faster than Grant is. While the jazz musician story wraps up at the end of this book, a longer story arc is woven in with it that is obviously going to take place over several volumes.

I didn’t enjoy this funny, violent, magical story quite as much as ‘Rivers of London’ but it’s still a great work of urban fantasy.

The above is an affiliate link. If you click through and buy something, Amazon will give me a few cents. This in no way influenced my review.
Posted by Laurie Brown at 3:25 PM