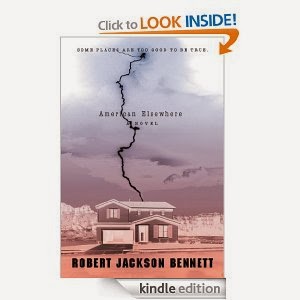 Mona Bright is a middle aged ex-cop with who has been drifting from job to job for awhile. When her father dies, she discovers that one of his assets is a house her long dead mother had in a tiny New Mexican town called Wink. Wink doesn’t show up on any maps, but the government quantum states research facility her mother worked at proves to be-barely- findable. Mona takes a road trip in another part of her inheritance: a red 1960s muscle car.

Once in Wink, she decides to stay in her mother’s house for a while. But right away, things seem odd. People never go out after dark. There are areas that no one goes near. The moon is pink sometimes. One man does nothing but work on his car, going so far as to start attaching household appliances to the engine. And Mrs. Benjamin would qualify as a slightly eccentric old widow if it weren’t for her mirror that moves things and her pantry that seems to be some Lovecraftian hell. There are a number of plot lines to keep track of, which slowly converge into bloody climax.

The writing reminded me of something Dean Koontz might write, or perhaps Steven King. There is a palpable atmosphere of not-rightness about everything, and everyone and everything seem to be in on a big secret she isn’t supposed to know. But chinks develop in the armor that the residents of Wink hide in, and ‘otherness’ soon gets loose big time. It’s a creepy book; a blend of science fiction and horror. It starts out slow- perhaps too slow; it could have used some pruning- but turned into a can’t-put-it-down story.

I received this book free from the Early Reviewers program in return for an honest review. This in no way affected my review.