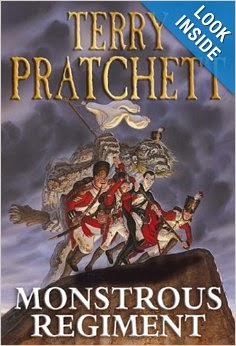 Borogravia has been at war so long, and with so many countries, that they’ve nearly run out of men and boys to send into battle. They aren’t very picky anymore about who they get to enlist.

Polly Perks, who is running her widowed father’s inn, wants to know what has happened to her brother, who enlisted and marched away a year ago. So when the recruiter comes to town, er, village, she cuts off her hair, dons men’s clothing, takes a male name, and passes for a boy. She knows how to act like a man: fart loudly and proudly, don’t be graceful, and punch your friends instead of hugging. She finds herself in a small band of recruits that includes a troll, a vampire who has sworn off blood, and an Igor- the race of people who are masters of sewing together bits of people who normally serve mad scientists. Leading them is Sergeant Jackrum, a large, loud, but smart and sympathetic, person who sets out to make men out of them- or at least, make soldiers out of them.

The story takes aim at gender inequality, war, religion, and government- with potshots at a few other things along the way- in Pratchett’s usual witty manner. To go into detail would be to go into spoiler territory, but suffice it to say that the recruits prove to be fast learners- very fast learners.

The pace of this novel is different from most of the Discworld series; despite being about war, it’s a little more low key. And that’s fine. The quieter mood fits perfectly with young recruits sneaking through the forest and infiltrating a castle

The above is an affiliate link. If you click through and buy something, Amazon will give me a few cents. This in no way affects my review.
Posted by Laurie Brown at 7:14 PM