Gideon Smith and the Mechanical Girl, by David Barnett. Tor, 2013 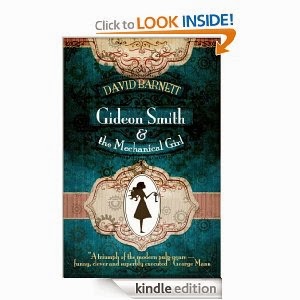 The first volume in a projected trilogy, Gideon Smith and the Mechanical Girl is set in a fairy typical steampunk world: Victorian era, airships, wild inventions, paranormal beings, historical characters mixed in with fictional ones.

Gideon Smith is a teenager living in out of the way Sandsend, son of a fisherman and addicted to the penny dreadful adventures of Captain Lucian Trigger. When Smith’s father and crew disappear off his fishing boat without a trace, things don’t seem right. He vows to go to London and engage said captain to investigate. Along the way to London, he meets (and intrigues with his story) Bram Stoker and rescues a mechanical girl, Maria, from slavery. Soon a band of adventurer’s is collected, with multiple aims: to again rescue the now kidnapped Maria, to seek vengeance for various deaths, to follow an exciting story; it’s all very exciting and at times confusing. But it’s well constructed, the characters are great fun (although I had a little trouble getting my mind around Elizabeth Bathory as a grieving and vengeful widow- okay, the vengeful part is easy to see), some fairly unique supernaturals are introduced, there are airship pirates, the women are as strong and resourceful as the men, and Barnett doesn’t seem to drop any of the plot strands. I eagerly await the next volume.

The above is an affiliate link. If you click through and buy something, Amazon will give me a few cents.
Posted by Laurie Brown at 7:17 PM