Stuck in the Middle With You: A Memoir of Parenting in Three Genders, by Jennifer Finney Boylan. Crown Publishers, 2013 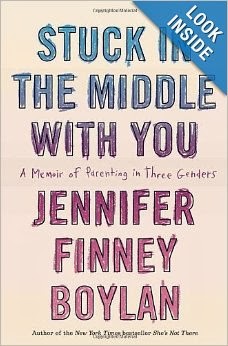 Writer James Finney-Boylan had been a father for six years when he decided that he could no longer continue the charade of living as a man. She spent six years in the transition process, then underwent gender reassignment therapy and became a mother named Jennifer. She and her wife, Deirdre, remained married and raised their two sons as a couple. Jennifer has written her transition story elsewhere; this is the story of them as a family. Told in alternating sections by Jennifer and via interviews with other writers about family and raising children, we discover that Jennifer’s worries that her transition would damage the boys were unfounded: they are happy, well adjusted young men who do not think that their family is even slightly unusual. Amazingly, given how cruel kids (and adults) can be to anyone even slightly ‘different’, the boys were not bullied or maltreated by their schoolmates. She admits that her transition was very lucky because most of the many, many things that could have gone bad did not.

The book is an easy, interesting read. While I have read other transition stories, none have focused on the family like this one does. The interviews show that families and parenting styles come in all shapes and methods. This book adds a new facet to the huge array of parenting books. The only problem was a little bit of choppiness in the flow.

"Stuck in the Middle with You" was provided to me by the Library Thing Early Reviewers program in return for an unbiased review.

The above is an affiliate link. If you click through and buy something, Amazon will give me a few cents.
Posted by Laurie Brown at 5:56 PM