Oscar Wilde and the Murders at Reading Gaol, by Gyles Brandreth. Touchstone, 2013 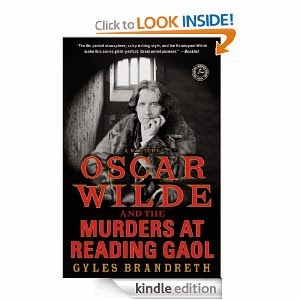 In 1895 Oscar Wilde was imprisoned for homosexuality. He spent two years at hard labor, in a dismal setting where the prisoners starved, were beaten, died of untreated illness, and were not allowed to talk or even look at each other. Despite being in proximity to others a couple of times a day, they were effectively in solitary confinement. This is the setting for this novel, the 6th in the series that feature Wilde as a detective so clever that his friend Arthur Conan Doyle based Sherlock Holmes on him.

The story is told by Wilde to his biographer Robert Sherard (a contemporary of Wilde’s), but it’s a retelling of how he told the story to a stranger in Paris, where he fled after his release from prison. In this tale, two gaolers were killed, perhaps murdered. Brothers, one was known as vicious while the other accepted sexual favors from prisoners in return for leniency. Someone higher up wants to know if it was murder, and if so, is the person being blamed the real killer? Wilde is given some leeway and preference in the name of figuring this out.

It’s a good mystery story, and Brandreth uses a lot of historical detail to bring the dank, stinking, horrible prison to vivid, unpleasant, life. There are a couple of nice twists in the tale. All in all a very entertaining adventure.

The above is an affiliate link. If you click through and buy something, Amazon will give me a few cents. This in no way affected my review.
Posted by Laurie Brown at 12:02 AM