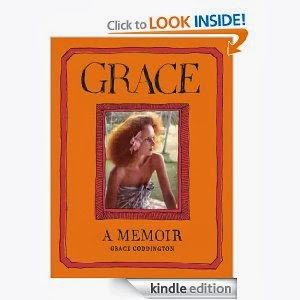 Grace Coddington was a fashion model in the 1960s, appearing in Vogue and other magazines. When she was 28, she moved to the behind the scenes side of fashion magazines and became a junior editor at British Vogue, later moving to photo editor. After a brief stint with Calvin Klein, she became creative director of American Vogue. Her whole life has been about fashion and photography. Along the way, she’s met and worked with many of the greats of fashion. Given my fascination with the subject, I thought I’d love this book.

The book, sadly, is merely ‘okay’. It’s flat, told in a ‘and then I’ format that brings to mine youthful ‘what I did on my summer vacation’ writings. Grace admits that she’s only read two books in her life (although obviously she’s had to have read hundreds of magazines in her work life), so it’s no surprise that she doesn’t have a fluent writing style. If you’re interested in the fashion world, you’ll like this book despite the lack of flow. Just to know who was doing what when is kind of interesting.

The most fascinating part of the book, to me, was that I finally know the why behind photo spreads in fashion magazines that barely show the clothing and are sometimes down right surrealistic. The spreads are art, not a catalog, and they have themes that have nothing to do with the clothing shown. Exciting to look at, they draw the reader into the *idea* of the clothing.

The book has many photographs, and is illustrated with Grace’s cute little drawings.

This book was provided to me free in return for an honest review. This in no way affected my review.