The Latecomers, by Helen Klein Ross. Little, Brown and Company, 2018 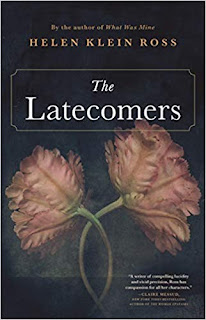 ‘The Latecomers’ is a big family saga that encompasses both the rich Hollingworths and their poor servant Bridey – although *that* fact isn’t widely known. While the book starts with 9/11, the story itself starts much earlier, when Bridey and her fiancé board a ship in Ireland to start a new life in America. Sadly, the fiancé dies on board ship, leaving a broke and pregnant Bridey to find her own way. Bridey spends her life working for the family that adopts her son; in large part, she mothers him more than his rich adoptive mother does.


The story is rich in details through the years. The household adoption of electrical appliances. Halley’s Comet. How housework was done. Out of wedlock childbirth in 1908. Marriage customs. Prohibition. The Great Depression. The Hollingsworth family goes through many changes in the time between 1908 and 2018, but the link between Bridey and her son Vincent is the main thread.


I found the book really interesting to read; the author really did her homework on the eras and the areas that the book takes place in. The cast of characters was interesting; some of them I really liked, while others I wasn’t so fond of. I think the story might have benefitted if the main arc, of the secret of Bridey’s son, had been cut shorter. I had almost lost interest in that arc by the time it was revealed. It’s a grand story, though, so four stars.

I received this book free from the Amazon Vine program in return for an unbiased review. This did not in any way effect my review.
Posted by Laurie Brown at 3:05 PM