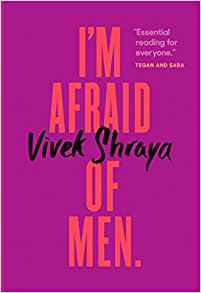 This is Shraya’s statement of what her experiences of dealing with men have been like. As a trans woman, she has, as the song says, ‘looked at life from both sides now’. As a boy, she was encouraged to be more male. She did body building, lowered her voice, and mimicked the walk of masculine men. She gave up color in her wardrobe, sticking to dark neutrals. Later in life she gave up trying to be what she was not, and started expressing her femininity. Now, instead of being harassed for not being masculine enough, she gets harassed for not being feminine enough. The world- and men in particular- just cannot deal with people like her. The majority of men (and women) want women and men to be firmly at the poles of the male/female spectrum, and so find themselves uncomfortable- and sometimes violent- in the presence of a trans or gender fluid person. This is an essential book for the 21st century, as we learn to view the world as non-binary.

I received this book free from the Amazon Vine program in return for an honest review. This did not affect my opinion.
Posted by Laurie Brown at 1:58 PM