A Conversation with a Cat, by Stephen Spotte. Open Books, 2018 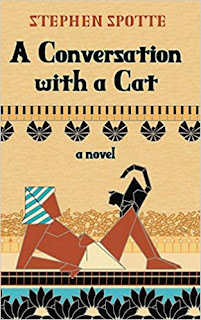 One evening, when a former alley cat named Jinx’s human is laying on the sofa, fresh from the hospital for gall bladder surgery, Jinx starts talking to the human. Sure, the human is not only on prescription meds but has done some self medicating with pot and alcohol, but it’s a pretty intense experience. Jinx tells the human about his former life as a pampered pet of Cleopatra. The heart of the story is the history of Cleopatra, Julius Caesar, and Mark Antony.


Sadly, even though it’s a story narrated by a cat, there is not much cat in the tale. It’s a fairly dry relating of the facts of the struggle between Egypt and Rome. Jinx doesn’t have much to do, and doesn’t develop a personality. Jinx’s human is a captive audience. The author has his facts down pat, but doesn’t make them come to life. Only three stars, even though a cat is the main POV.

I received this book from the Library Thing Early Reviewers program in return for an honest review. This in no way affected my opinion.