God is in the Crowd: Twenty-first Century Judaism, by Tal Keinan. Spiegel & Grau, 2018 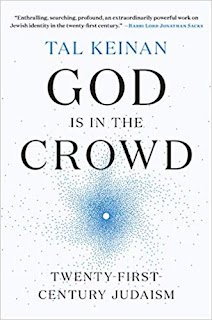 This is a hard book to categorize. The first part is autobiography; Keinan was raised in the US and went to school here, but then moved to Israel and joined the Air Force. He was the only non-Israeli fighter pilot there. After his time with the military, he became a financial man as well as chairing a nonprofit that lends to projects including ones by Israeli Palestinians. The next section explores what he feels is a crisis in Judaism. Many US and European Jews are marrying outside the faith, and not raising their children as religious Jews. If that continues, he sees the end of Judaism as it’s known- and been known- for centuries. Judaism survived the Diaspora, pogroms, and the Holocaust only to face extinction by marrying out. His proposed cure for this is program that would fund (via voluntary donations by members) long term camps for Jewish youth, wherein they would spend one year in America and one in Israel, learning the culture of whichever one they didn’t grow up in; it would also pay for the college education of the children. He also proposes that the president of Israel (largely a ceremonial position at this point) be given power over all Jewish religious affairs- a sort of Pope for Judaism- and that the president be elected by *all* Jews the world over, not just Israelis. Right now, Israel has religious issue being adjudicated by ultra-Orthodox Jews, while American Jewry is composed mainly of Reform and Conservative Jews. He feels that the wisdom of the crowd- having all branches of Judaism involved- will save, even though it may change it, Judaism. He doesn’t seem to take sides in a right/left battle; he’s fairly even handed. It is an interesting look into what’s happening to Judaism. Three and a half stars.

I received this book free from the Amazon Vine Program in return for an unbiased review. This did not affect my opinions.
Posted by Laurie Brown at 4:24 PM