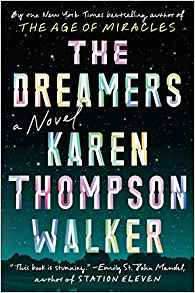 In a small California college town, a student comes back from a party, falls into bed, and doesn’t get up in the morning. This doesn’t alarm her roommate much; they are college kids, after all, and the girl is a party girl. But when Mei, the roommate, comes back in the afternoon to find the girl still out of it, she worries. When she can’t wake the girl, Mei asks for help. In days, more students from the same dormitory fall into comas. Then, despite quarantine, more people start falling ill. Soon the whole town is quarantined, with all roads blocked.


The story follows multiple people: Mei and another student she teams up with; a young couple with a new baby; two little girls with a survivalist father who has gone into a coma; an older couple; and a doctor shut in the town, who only wants to get out and home to her daughter. The majority of the people fall to the illness. They show heightened brain activity, an unprecedented amount of REM. But the story is only partially about the victims; for the most part, it’s about the people who don’t. While on the face of it it’s a science fiction story, it’s really a psychological drama in a SF setting.


Not a great deal happens during the novel, other than the illness and quarantine, but the writing is wonderful. The characters are good. It draws you along. But.. it never really clicked for me. I don’t know what didn’t click for me or why, but I just found it a bit boring at times. Four stars

This did not alter my opinions.
Posted by Laurie Brown at 3:14 PM