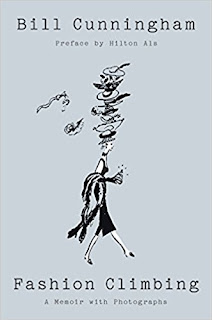 Born during the Depression to an Irish-American family with conservative values, Bill Cunningham’s penchant for fancy clothes and beautiful décor was discouraged- discouraged to the point of receiving a brutal beating when his mother caught four year old Bill wearing his sister’s organdy party dress. His interest- passion- couldn’t be kept down, however, and he devoted his entire life to fashion in one way or another. He worked in boutiques as a teen, became a sought-after hat designer in the 50s (who was put out of business by the fact that, come the 60s, no one was wearing hats anymore), crashed every high-profile party, became an on-the-scene fashion photographer- working for the New York Times at one point, and basically celebrated the beautiful. More than fashion, he was interested in style- the clothes and the hats and the jewels had to be worn with originality and elan.


The manuscript for ‘Fashion Climbing’ was found, neatly typewritten and put away, after his death. The memoir covers the years before he became a photographer. Even though he had his share of starving times he was always cheerful and greeted the world as a place of delight. He wasn’t all sweetness and light, though; parts of the last chapter ‘On Taste’ where he makes it clear that most women don’t have style, and that to carry of wearing high fashion one needs not just great posture and manners but ‘generations of good breeding’; after all, one ‘can’t slipcover a pig and expect it not to grunt’. Oddly, this opinion is in the same paragraph where he tells us that one of the day’s most elegant women was a prostitute not long before!


It’s a short book and a fast read, interesting to someone who loves fashion history. A number of black and white pictures (more would have been great!), of Cunningham and various fashionable women- these are not fashion show shots. Four stars.

I received this book free from the Amazon Vine program in return for an unbiased review. This did not influence my opinions.