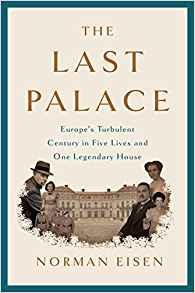 The Last Palace isn’t a palace in the meaning that a ruler lived there. It was originally a private residence, built by Otto Petschek (who made his fortune in coal) after World War 1. He never finished the building; he was picky to the point of obsession. Once, after it was supposedly finished, he had most of it torn down and restarted. He spared no expense, and brought luxury items from around the world. It’s an amazing place. During WW 2, the Petschek family had to flee. The house was then used by the Nazis- when author Eisen, an ambassador from the US to Czechoslovakia, came to live in the house, he was astonished to find little swastikas on the underside of the chairs and table. They were inventory marks and numbers. Thankfully for the palace, general Toussaint, who lived in the house during the war, was dedicated to preserving the house (and trying to save the country from Soviet occupation; that part failed). Shirley Temple Black was ambassador to the Czech Republic during the Velvet Revolution-the story of her time living in the palace is given in the book. The house was looted by both Nazis and Russian occupiers; fortunately, Petschek’s loyal butler guarded many treasures in the house. He stayed, regardless of who the occupier was, to protect the palace. When Eisen became ambassador, he –after much persuasion- brought his mother over to visit. She and her family had managed to escape the Nazis when they started putting Jews on railroad cars to the death camps.


It’ not just the story of the house, obviously. It’s the story of 20th century Czechoslovakian history. This was something I knew nothing about, and this book provided the information in short and easy to read form. The book is very well researched; the notes and bibliography occupy over a hundred pages. At times it got very dry and a little *too* detailed for me, but for the most part, it’s a pretty interesting story. The history of the palace is sort of the history of the Czech Republic in short form. Four stars.

I received this book free from the Amazon Vine Program in return for an honest review. This did not affect my opinion.
Posted by Laurie Brown at 8:45 AM