From the Corner of His Eye, by Dean Koontz. Bantam Books, 2000 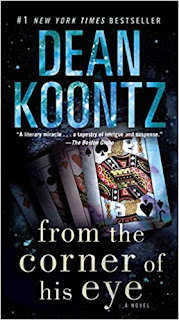 When I think of Dean Koontz, I tend to think of his horror writing. This book, while having horrifying things happen in it, is more a combination of science fiction and philosophical tract. It’s plain good versus evil, where the bad is very, very bad and the good is very, very good. The villain, Junior Cain, is a psychopath with an exaggerated view of himself- he thinks he’s cultured, very smart, and a chick magnet. Also, he’s a serial killer and rapist.  The good people – all the other characters- are kind, giving, and selfless. We’ve got a girl who is raising the boy, Bart, who’s father died the day he was born. She, Agnes, is known as the Pie Lady because she bakes pies and delivers them to the less fortunate. Celestina is raising her dead sister’s girl, Angel- who is the child of the rapist/killer. Thomas Vanadium is a homicide detective who is stalking Cain, because the death of Cain’s wife seems suspicious. Vanadium also likes to do tricks with coins, making them appear and disappear.


At three years of age, Bart develops a cancer that requires him to have his eyes removed (this cancer really exists, and children *do* have to have their eyes removed to keep it from spreading). A few years later, though, his mother realizes that he can see. His explanation? That there are other dimensions, and a lot of them, he still has eyes. So he checks from one of those dimensions to see what path is clear. Also, he can stay dry by walking between raindrops. It all has to do with quantum physics. Cain is searching for Bart, because he happened to be listening to a sermon on tape while he was raping Celestina’s sister. For whatever reason, he’s decided that Bart is his child from the rape, and that if he kills Bart his miseries will end… yeah, I was confused. It’s a long book (730 pages), and I felt that in places it was just *too* long. It takes a very long time for all the characters to come together, and then, with just a nudge of a quantum physics trick, the story ends. I was left feeling rather let down. I can only give it four stars because of these problems.
Posted by Laurie Brown at 3:24 PM