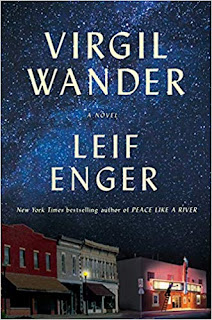 After sliding on snow and sailing off the road into Lake Superior, Virgil Wander finds many of his memories, some fine motor control, and a lot of words are missing. Wander lives in a small town, though, so there are lots of folks willing to help him, especially as he seems to have had a personality transplant along with his amnesia.


Greenstone, Minnesota is a town that’s hit the skids. The mining is long gone. The ships no longer put into their port. There is very little money coming in, and a lot of people have left for good. So Wander’s home and business, the Empress movie theater, where he shows old movies, is doing poorly to say the least. Enter Rune, a Norwegian senior citizen who makes kites in unlikely forms: a man, a dog, a cast iron stove… Rune (who is possibly Odin- or Santa) is there to try and find a son he never knew he had until a short time ago. Sadly, the son is long gone- presumed dead- but he himself left a son, now a teenager, who Rune hopes to get to know. Wander invites Rune to stay in a spare room- Wander can’t quite be left alone for a bit or he’s apt to leave the tea kettle on until the place burns down or something. Meanwhile, we meet the quirky population of Greenstone as Wander tries to orient himself in a place he doesn’t quite remember and Rune seeks his son through the memories of others. And then there are the animals: a tame raven, a pet raccoon who is reverting to feral- possibly because of rabies- and a huge sturgeon who lures a man to his death. Oh, and the frogs that rain down during one storm, but they aren’t really personalities so much as a plague. It’s part Lake Woebegon, part Red Green, and possibly a bit of Discworld.


There is not much in the way of plot. It’s about finding oneself, it’s about being kind to others, it’s a novel of place as well as character. The writing is beautiful, and makes you cheer for the characters. It’s not fast paced but it does keep you pulled in. It’s warm in feeling but certainly not a ‘cozy’ story. It’s full of symbols and myth. Four and a half stars.

I received this book free in return for an honest review from the Amazon Vine program. This did not influence my opinion.
Posted by Laurie Brown at 3:12 PM

Email ThisBlogThis!Share to TwitterShare to FacebookShare to Pinterest
Labels: community, myth, search for self, symbols