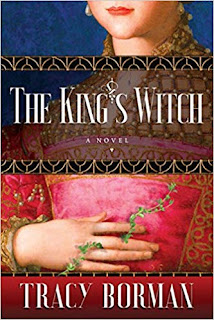 In 1603, Queen Elizabeth the First died, with Frances Gorges by her side, easing her death with her herbal knowledge. Frances was then allowed to ‘escape’ from court for a year, spending her time at the family estate, tending the garden and making up remedies. Then her highly placed uncle forces her to return to court, to be the Lady of the Bedchamber to Princess Elizabeth, daughter of the new King James. This is a tense position to be in; James is a witch hunter and the women with the arts of healing and herbs are pretty much considered to all be witches. James is also very anti-Catholic, and pretty much only listens to his young, male favorites. Frances has no desire to play the court games of currying favor; she takes her job of being companion and maid to the princess seriously and the only courtier she trusts is Thomas Wintour, who may not be what she thinks he is... .it’s a time of unrest in general and her own position and life are put in danger when she heals Queen Anne of a fever, bringing her to the attention of Robert Cecil, the Lord of the Privy Seal. She accidentally becomes involved with the Gunpowder Plot, a plot to unseat James that most of us Yanks only know about as a yearly event in the UK to blow off fireworks on Guy Fawkes Day.


The book is well written; I felt a great deal of sympathy for Frances. The court was a dangerous place, and the author skillfully creates the claustrophobic air that would have existed. I loved the attention to detail. This book is the first of a projected trilogy, so there is no conclusion to Frances’s story, but a chapter in her life is definitely over. I have no idea what happened to the real Frances, so an air of suspense still exists. Four stars.

I received a copy of this book from Net Galley in return for an unbiased review. This did not influence my review.
Posted by Laurie Brown at 1:48 PM