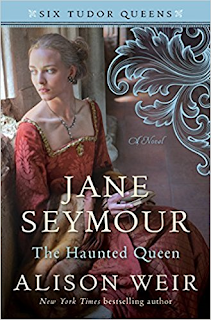 Jane Seymour is a Tudor queen about which less has been written; she was a quiet girl, who spent her early years wanting to become a nun. Her home life was rather horrific: her brother’s wife became her father’s mistress. Ultimately she is sent to court to be Lady in Waiting to Henry’s first queen, Catherine of Aragon. She loves Catherine, and dislikes Henry’s adulteries. When he banishes Catherine and declares their marriage null, she is reassigned to Anne Boleyn, whom she despises. When Anne in turn falls from favor, she is flattered but alarmed when the king’s attentions turn to her.


Jane was supposed to be Henry’s favorite queen; she gave him a living son and died before he could get bored with her. He is buried next to her. She was involved with Henry for only 3 years- which was longer, actually, than I’d thought. She left behind no letters and was not involved in politics or religious arguing, so her character can only be surmised from what little others wrote about her. Weir has given us a pious, private girl who was pushed into the king’s path by her family. Sadly, this girl failed to take fire as a character. She comes across as one of those people you don’t pay much attention to in real life.


The first part of the book is very, very heavily entwined with the stories of Catherine of Aragon and Anne Boleyn, because Jane lived through that and knew them, and she was not a history maker until after they were dead. There is a lot of physical details in the book, which bring the time alive, but not, unfortunately, Jane. Three stars.

I received a copy of this book free from Net Galley in return for an unbiased review. This did not influence my review.
Posted by Laurie Brown at 12:44 PM