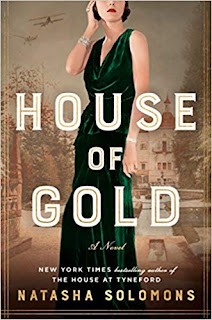 The House of Gold is the Goldbaum dynasty, who own and run an international banking company. Probably the richest family is the world at the time of the novel (pre- and through WW 1), they keep it in the family by marrying cousins. Thus Greta Goldbaum of the Viennese branch of the family is arranged to marry Albert Goldbaum of the London branch. Never mind that they have never met and have nothing in common but their name. Goldbaum men are bankers; Goldbaum women marry Goldbaum men and have Goldbaum babies. Greta is not a quiet, do as she’s told girl and she balks at the thought of marrying someone she doesn’t know, that, furthermore, sounds boring as can be- an entomologist as a passionate hobby!. And, she’ll miss her brother, with whom she’s spent many a night outdoors, gazing up at the sky.


The marriage takes place as planned, of course. Albert turns out to be not a monster, but no more eager for the marriage than Greta is. Albert’s mother, though, takes to Greta. She is an avid gardener, and has huge greenhouses as well as outdoor plantings. She gives an undeveloped portion of the estate to Greta for her own garden, and Greta, despite never having shown an interest in learning before, reads gardening book after gardening book, taking it all very seriously but also joyously. She has found her forte. And it leads to a bit of a link to Albert- with any garden come insects. But this isn’t just a frivolity for Greta. When she finds herself with a home for unwed mothers on her hands, she starts teaching them vegetable and fruit gardening, so that they shall have a way of earning money once they are back on their own. I really enjoyed this aspect of the book, showing Greta’s growth.


When World War 1 breaks out, life changes. The younger Goldbaum men uniform up and go to war. The women roll bandages. The manor house is turned into a hospital. The Goldbaum men, formerly insulated from most of the bad things in the world, suddenly find themselves in horrendous circumstances, and not all survive.


I found Greta frustrating at first, but as her character grew and matured, I enjoyed her a great deal. The relationship of Greta and Albert was also a joy to read. The descriptions of the house and gardens were beautiful and detailed, which makes the harsh conditions and events of the war harder to read. And, of course, all the thread of anti-Semitism runs through it all. There are a lot of different threads woven into this tale, and several POVs, including an orphan who is not related to the family but was dependent on it for a while. Not all the threads get tied off at the end of the novel, which seemed abrupt and forced. Hopefully this means there will be a sequel. Four and a half stars.

I received this book free from the Amazon Vine program in return for an unbiased review. This did not influence my review.
Posted by Laurie Brown at 4:32 PM