The Sisters of the Winter Wood, by Rena Rossner. Redhook Books, 2018 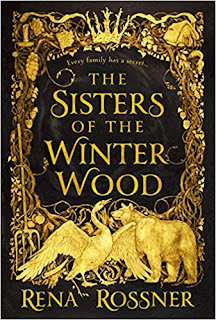 Another modern telling of old fairy tales and more; here’s Christina Rosseti’s Goblin Market, Leda and the Swan, Russian folklore, and I suspect more. The author gives us duel POVs: Liba, almost 18, tells her tale in prose, is dark haired and considers herself fat; and Laya, 15, so blond she’s almost white haired, very slim and beautiful, and writes her parts in poetry. When word comes that their father’s father is on his deathbed, their parents must leave at once, walking through the wintry landscape. Liba and Laya stay to tend to the animals. They live in the woods, where the people of the village do not dare go.


In Dubossary, the town they live near, their father was accepted right off by the Jews of the shtetl, but their mother never has been because she refuses to cover her hair –they claim they reject her because her kitchen is not kosher (it is) but they buy her baked goods; would they really do that if they thought her kitchen wasn’t kosher? Or perhaps I missed something and she was selling just to the goyim. Conversely, their parents don’t think a boy like Dovid, who is sweet, intelligent, and hardworking isn’t good enough for Liba because his father is the butcher! Ah, the barriers people build up between themselves.


Liba and Laya’s parents have secrets, but they don’t have time to explain everything before they go. The girls are on their own. They know how to take care of the animals and do the baking and cooking, but they are teenagers with no one to advise them on how to deal with things like the clan of newcomers to the market. These newcomers are good looking, and have luscious ripe fruits for sale- even though it’s winter. They have a hypnotic effect on Laya and other village girls. To add to their personal problems (like fear of turning into a bear), people in the village are being killed. Is it a bear? It’s been a long time since there’s been one around. Or is it the Jews? Are they using the blood of the victims to make Passover matzoh? Will there be a move to remove the Jews of the village-a pogrom similar to others in Russia? Who are the strange men looking for Liba and Laya’s father?


There is a lot of running about and searching for Laya, who tends to go missing. Things get off to kind of a slow start, but pick up by the middle. There is a lot of not knowing who to trust, and Liba has a problem with asking for help. There is a lot of Yiddish, Ukrainian, and Hebrew words used. Most of them are obvious as to what they mean; for others, there is a glossary in the back. I enjoyed their use; the book is told in the first persons, so it makes sense they would think/write using those words. It added depth to the novel for me. There is rather more romance in the novel than I expected, but in Liba’s case it doesn’t over power her story. Laya is a different matter.. but there are good reasons for that. I very much enjoyed the book and hated to put it down. It’s coming of age and romance and magic. I see it’s aimed at the adult market, but it did seem more like a Young Adult story. Five stars.

I received this book free from the Amazon Vine program in return for an unbiased review. This did not influence my review.
Posted by Laurie Brown at 4:31 PM