Never Anyone But You, by Rupert Thomson. Other Press, 2018 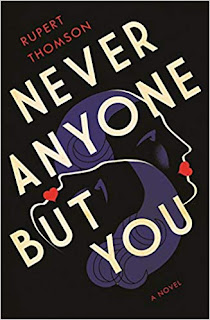 In the years right before World War One, two teenaged girls meet. Suzanne Malherbe and Lucie Schwob fall in love, which of course they must hide. Then in an odd twist of fate, one’s mother marries the other’s father, making them step-sisters. Now they are free to live together, to put their arms around each other. If this was in a work of fiction I would think it was too much; but this is not fiction, these were real people. After they leave school, they move to Paris where, as part of the Surrealist movement, they fit in, one an artist the other a writer, both adopting male names (Marcel Moore and the gender-fluid Claude Cahun). Their best known works are photographs they collaborated on.


As anti-Semitism penetrates Paris, they move to the Channel Island of Jersey. Now middle aged, no one pays them much attention. When the Nazis occupy the island, they set about their greatest Surrealistic project: subverting the Nazis. As “old women” (barely in their 50s!) they were pretty invisible to the soldiers. They would type up subversive leaflets and sneak them into pockets and cigarette packs. This went on for quite a while before the Nazis figured out it was them. They spent a good amount of time imprisoned by the Nazis, held in solitary, refusing to cooperate. Amazingly, they both survived the war. The Nazis never did believe that the two women were working alone; they felt there *had* to be a network of Resistance fighters behind them!


Thomson tells the story from Marcel’s point of view; she outlived Claude and was the more well-grounded of the pair- Claude seems to have inherited some of her mother’s mental illnesses. The prose is clear and simple, but I felt that Marcel was a somewhat distant narrator. The part of the women’s lives where they are living in Paris, mingling with all the famous people, seemed almost brushed over, as if it were an unimportant interlude, a list of famous names. Things only come to life once they begin their undercover work. Marcel’s focus was always on her beloved Claude, and so other people, no matter how famous, get short shrift. Four stars.

Neither of these things influenced my review.
Posted by Laurie Brown at 2:11 PM