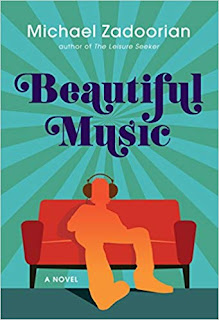 In 1969, Danny Yzemski spends most of his free time in the former coal storage bin in the basement, building model cars. He is already into music, as is his father, although their tastes run very differently. Danny likes rock, while his father likes “beautiful music”- modern songs covered by an orchestra. To better hear his Muzak, he buys a stereo unit for the basement den. Through the years, he teaches Danny to drive in his huge car, and they haunt the record stores together. Then his father suddenly dies, and life changes for him. His mother is alcoholic and mentally ill, and her sudden widowhood seems to precipitate a psychotic break. She drinks, smokes, and watches TV. That’s it. Everything else is Danny’s problem. He gets a job, drives without a license, learns about hard rock and deep cuts, and actually gets a friend.


It’s a coming of age tale, from ages 10 to 16, told in first person, sometimes in letters to his dead father. Music is what gets him through a really tough adolescence. It brings him out of his loner shell, and gives him something to sooth his emotions. It says things he thinks, but better. Surprisingly, there is no girlfriend; most coming of age books have a girl/boy who really, really understands the subject like no one else. Danny stands on his own, with some help from his friend. It’s very well written; it brought back a lot of memories of my teen years and the music from it and how it felt to have a song say exactly how you feel. Five stars, for making a Dickensian adolescence seem perfectly believable.

I received this book free from the Amazon Vine program in return for an honest review. This in no way influenced my opinion