The Woman in the Camphor Trunk, by Jennifer Kincheloe. Seventh Street Books, 2017 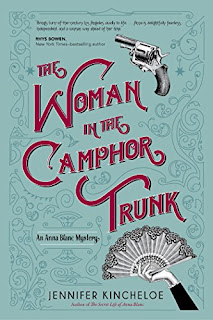 The opening scene of this novel has the protagonist running down the beach, with a rotting head in a bucket, trying to escape a policeman. Hampered by long, tight, skirts and fancy shoes, she almost doesn’t make it, but in the end she escapes.

Set in 1908 Los Angeles, Anna Blanc, society girl, has (in the last novel, which I did not read) turned crime solver and spurned her arranged engagement. This has caused her father to disown her and cast her out without a penny. She is living in a rundown apartment, surrounded by fancy furniture and fine dresses and hats, shoes unfit for walking the disgusting streets of LA, and a few pieces of jewelry that she had loaned out the day her father kicked her out. She lives on a diet of Cracker Jacks and tinned kippers, having, at the beginning, no income and a lot of back rent to pay.

She has now been hired as assistant matron at the LA precinct house and jail; her job is to chase down runaways, deal with ladies of the night, interview women who feel uneasy talking to male police, and basically not do anything exciting. But when she gets taken along on an interview in Chinatown, the case gets interesting. The body of a white woman is found in a trunk- in the room of a Chinese man. Given the rampant racism of the time, this could ignite riots. The investigation must take place quickly and quietly. Add to this an incipient tong war over kidnapped child prostitutes, and a personal angle with the slain white woman, and we have a complex narrative. Of course there is a romantic thread, too, one that started in the previous book, with a detective who wants to marry and have a family. Anna refuses to swear obedience to anyone, and does not want to have children.  And then there is that rotting head…

I loved the writing. Kincheloe brought old Los Angeles to life for me, including the non-tourist part of Chinatown where much of the story takes place. The author puts details about things like dress, enough to show the era, but not *too* much detail. I liked Anna, although she is a little bit too full of her ability to take care of herself. Like it or not, a woman in heavy skirts and a corset, untrained in weapons or self-defense, cannot wander into just any situation and expect to fight her way out! The other characters are good, and I hope they get fleshed out more as the series continues. The killer was one I didn’t expect, but the killer had reasons that made sense for the time and place. Five stars.

The above is an affiliate link. If you click through and buy something-anything- from Amazon they will give me a few cents.

I received this book free from the Amazon Vine program. in return for an honest review