Victorians Undone: Tales of the Flesh in the Age of Decorum, by Kathryn Hughes. Johns Hopkins University Press, 2017, 2018 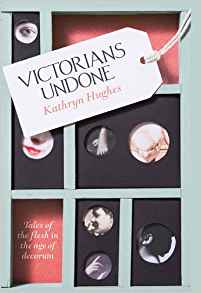 While the title sounds risqué, the book itself is not. While the book goes off on many tangents, the main focus is on five people- and, more specifically, specific parts of their bodies.

We start with Lady Flora’s belly. Lady Flora was a lady in waiting to Queen Victoria’s mother. Victoria and her mother were *not* close; the Duchess of Kent thought she and her ‘friend’, Sir John Conroy, should reign as regents for five years, even though Victoria had reached 18, the age of majority. Victoria would have none of that, and she pushed her mother away hard. When the unmarried Lady Flora’s belly begin to swell, it was another wedge between the two royal women. Flora swore she was a virgin, and, yet, her belly got even larger as she lost weight on the rest of her body. Flora was forced to undergo intimate examinations by physicians, who swore she was still a virgin. More than nine months passed. In any other situation, people would have accepted that Flora was desperately ill rather than pregnant, but this was the Victorian era and Victoria hated Flora. After her death, her family had an autopsy done, with numerous doctors present, to prove there was no child inside flora and that there never had been. Why was everyone so obsessed with this? I guess because they had no soap operas back then.

After that we have Charles Darwin’s beard (which wanders through how human females go about selecting acceptable mates), George Eliot’s hand (supposedly her right hand was significantly larger than her left, due to manual labor as a child in the family dairy), Fanny Cornforth’s mouth (a model for Dante Gabriel Rosseti as well as being his mistress-a role she played with many other men, too) that goes over prostitution in the Victorian era, and the tragic murder of little Fanny Adams, a child who was cut into pieces which were found strewn about a park.

It’s mostly a very interesting book- it’s full of information about the Victorian era, mostly focusing on how they thought about the fact that humans are animals with bodies that ached, pained, belched, farted, and could show what their lives were like. The author goes off on many tangents and most of them are fascinating (although some were less fascinating; hugely so). Some things still leave me puzzled; why did Eliot’s fans and family want to hide the fact that she had done manual labor as a young woman? (and, as it turns out, she hadn’t) It’s a book for the lovers of historical trivia. Four stars out of five.

I received this book free from the  Amazon Vine program in return for a fair review.