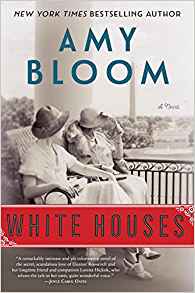 Most Americans are aware that Franklin Roosevelt had girls on the side both before and during his presidency, but fewer are aware that Eleanor did, too. This book of historical fiction/fictionalized biography is told from the point of view of Lorena Hickok, Eleanor’s longtime partner. Hickok was raised dirt poor, in an abusive household. She became a journalist and was assigned to cover Franklin’s first presidential campaign. The two felt drawn to each other, despite the wide differences in their personalities and upbringing.

Told from “Hick’s” point of view, the story moves between different times: Hick’s horrible childhood and early working years; the short time when Hick lived in the White House with Eleanor and FDR (and FDR’s girlfriend, Missy LeHand)- Hick was given a job in the administration; an interlude after FDR’s death; and times in between when Eleanor and Hick were separated. While it was all right for FDR’s extramarital relationships to be talked and joked about, it was a different situation for Eleanor. A shroud of secrecy envelopes the two women’s relationship at all times, save for one anonymous getaway on a camping trip.

Bloom went through more than three thousand letters as well as diaries to research this book, so it is meticulously researched, and the prose is marvelous- great descriptives! Eleanor Roosevelt has always been one of my heroes. So I don’t know why, even though I really *liked* the book, I didn’t *love* it. The women never caught fire and came to life for me. Still, definitely four stars out of five.