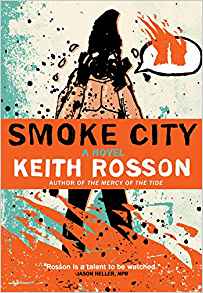 In the near future, ghosts referred to as “smokes” have started appearing in southern California and northern Mexico, with Los Angeles as smoke central. These ghosts don’t go ‘boo’; they do not interact with people at all. They just show up, do their thing, and disappear.

Mike Vale lives in Portland, OR. Once the most highly praised young artist in the US, for years he’s been a self-destructive drunk who hasn’t painted a thing. Upon getting word that his ex-wife has suddenly died, he feels he must get down to LA for her funeral. He begins a guilt driven road trip.

Marvin Deitz owns a vintage record store, and is being evicted by the mob connected landlord. He is on a short leash with his therapist, because he’s been open about his belief that he is the reincarnation of the executioner who lit the fire that killed Joan of Arc. He also figures he’s about to die, since not once in his many, many lifetimes has he lived past 57- and his birthday is in a few days (he remembers every one of his lives). When he sees a woman on a TV talk show who claims to be the reincarnation of Joan of Arc, he feels he must talk with her and maybe, at long last, be forgiven for what he did. He needs a ride to LA.

Casper is a nerd who dreams of being a ghost hunter. He figures that the smokes are a great opportunity to become one and have his own reality show- but he has no car.

So this odd trio ends up on the freeway heading south to LA. Everything that can go wrong, does. While all three are on quests, it’s pretty much a character driven book. It’s sort of like a grail quest mashed up with “Fear and Loathing in Las Vegas”.

I really enjoyed this book. For all the grim story lines dealing with guilt and alcoholism, it was amusing. I ended up liking all the characters (even Mike), and was happy with how the story turned out. This is only the second book by this author, and I see he’s grown since the first one (which was also very good). Four and a half stars.

I was sent a copy of this book by the publisher for review.

Neither of these things influenced my review.
Posted by Laurie Brown at 2:59 PM