The Battle for Beverly Hills: A City’s Independence and the Birth of Celebrity Politics, by Nancie Clare. St. Martin’s Press, 2018 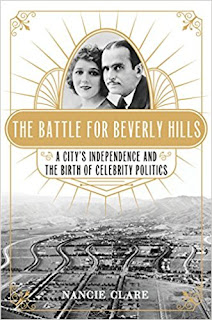 While on a map it looks like the city of Los Angeles is a giant amoeba that has engulfed everything in the county, there is an island in the middle of it that stands out: Beverly Hills is an incorporated city to this day. It had not existed for very many years as a city (it was originally a lima bean farm) when it was proposed that it be annexed by Los Angeles- the denizens of Beverly Hills had huge gardens with water hungry plantings and the small well in city property wasn’t keeping up with demands. Allowing themselves to be annexed by LA would give them access to the Owens Valley water that was making Los Angeles green. But it would also mean they could no longer have their own school system and police force. In Prohibition Era Beverly Hills, having police that turned a blind eye to booze fueled parties was a very nice perk.

Not all Beverly Hills denizens wanted or needed these perks, and developers were dying to put in more housing but needed a good water source to do so. So it was put up to a vote. This was when the first instance of celebrity campaigning took place. Mary Pickford (and others, but she was the main one) took to speaking for remaining a separate city heavily. And it worked. This started the habit of Hollywood stars speaking out for politicians and issues.

The book is fairly short, and if you are into early century southern California history, it is fun. The celebrities, the horribly corrupt LA police force, the development of what Beverly Hills was going to look like; it all made its mark on the area. Well written. Four out of five stars.

Neither of these things influenced my review.
Posted by Laurie Brown at 2:18 PM