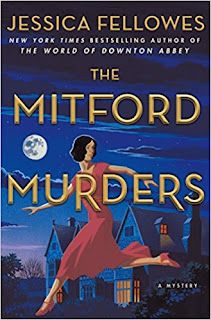 “The Mitford Murders” is a little bit of a misnomer for this book; no Mitfords were harmed in the making of this book. The Mitford family is fairly central to the book, but not in a direct way, except for Nancy Mitford, the oldest of the girls.

The two main characters- other than Nancy- are Louisa Cannon, daughter of a washerwoman, desperate to escape her Fagin of an uncle who has moved in since her father died; and Guy Sullivan, a railway policeman. Louisa and Guy meet when she jumps off a train on her way to apply for the job of under governess for the wealthy Mitford family. At the about the same moment, there is a murder on the train. Florence Nightingale Shore, recently retired military nurse, is headed to visit a friend when she is found beaten and dying in her seat. When no murderer is found and the case is dropped, Guy finds himself obsessed with figuring out who did it. Fifteen year old Nancy Mitford shares this obsession and Louisa, as Nancy’s chaperone, finds herself deep into it also. Nancy also lives in fear that her uncle will catch up with her, or that her employers will find out that she used to pickpocket for him as a child.

The amateur investigation goes slowly- as a live in servant, Louisa has little time off. Guy also has little time on his own to follow things up. Louisa, however, has the advantage that Nancy can tell her parents that she needs Louisa to go with her to this place or that, thus getting them out of the house. The investigation threads (the author alternates between Louisa and Guy’s points of view) weave in and around the daily life of living in a manor house with lots of kids and servants, chaperoning Nancy to dress makers and a dance; and Guy being bullied at home by his numerous older and larger brothers.

The murder of F.N. Shore was a real event; her murder was never solved. Obviously that won’t do for a novel, so we are provided with a killer, as well as several red herrings. I enjoyed the way the author set the story well in the period with details. Most of the story is set in the below-stairs milieu rather than upstairs- Nancy’s parents don’t make many appearances. Sadly, some of the things that made the Mitford clan unique make no appearance; the kids had their own language that they made up, for instance. Perhaps that will appear in later volumes. (I understand that there *will* be further volumes, one with each of the Mitford girls as the star. I am not sure how she will make Hitler-loving Unity a sympathetic character…) I enjoyed the book, but don’t consider it stellar- 4 stars out of 5.

Neither of these things influenced my review.
Posted by Laurie Brown at 12:19 PM