See What I Have Done, by Sarah Schmidt. Atlantic Monthly Press, 2017 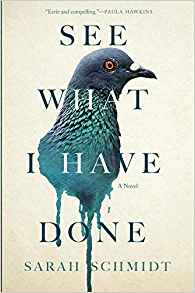 Most Americans are familiar with the kid’s rhyme “Lizzie Borden took an axe; and gave her mother forty whacks; When she saw what she had done; she gave her father forty-one”. Borden was a real person, and the murders of her father and step-mother were indeed the bloody result of multiple axe wounds. Lizzie was tried for the murders and acquitted, in large part because people back then couldn’t believe that a gentlewoman would do such a thing.

This fictionalized version of the tale starts with Lizzie yelling for the maid to come quickly, because someone had killed her father. Then we have a short recital from her older sister, Emma. From there we bounce back to the day before the murders; the different chapters are told by Lizzie, Emma, the maid Bridget, and Benjamin, a crude thug hired by their uncle to ‘do something’ to their father. The minutia of what happened that day, and the day of the murder, are seen from all points of view. From them we get lots and lots of back story, too. From them we also realize that Lizzie is most likely an unreliable narrator- very unreliable. I never did decide if she was mentally ill or just incredibly self-centered.

We are never given a rock solid case that Lizzie performed the murders, although it doesn’t look good for her. The things that made me wonder were the presence of the uncle (who seems to have a very unhealthy relationship with Lizzie, and perhaps Emma), and the thug for hire who was on the premises when the murders were done.

The most prominent thing about the book is the mood. The Borden household is claustrophobic in the extreme. The father is abusive, stingy, and a control freak. The step-mother tries, but ends up punching herself in the stomach repeatedly to vent her frustrations. Bridget the maid is normal; she just wants to earn enough money to get out of that household. Emma is a sympathetic character; she has been thwarted all her life, unable to do the things she wants, told by her mother to take care of Lizzie before she died. Lizzie is… horrible. Cruel to Emma and to her stepmother, she is almost out of touch with reality. The prose creates the hot, close atmosphere of the household, and it’s hard to take. I wanted to be away from those people; I can only imagine how much the Bordens wanted away from each other! Reading this is an immersive experience; the author describes the smells, the sounds of their bodies, the heat, the godawful food, in great detail. It’s not a pleasant read, but it is well done. Four stars out of five.

This did not influence my review.
Posted by Laurie Brown at 6:50 PM