The Curious Affair of the Witch at Wayside Cross (From the Casebooks of Jesperson & Lane), by Lisa Tuttle. Hydra, 2017 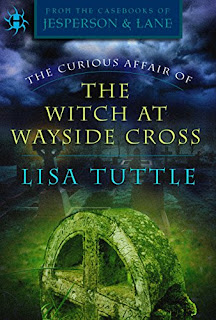 The adventure starts when someone bangs relentlessly on the front door at the combined office and living quarters of detectives Jesperson and Lane in the small hours of the morning. When admitted, he is sweating and disheveled. He points to Lane and says “Witch!” and drops dead.

Neither of them know the man, so a quick search of his pockets is made. An address book is found and Lane hastily copies it before the police can arrive. This enables them to locate his brother, who hires them to find out how Charles Manning died. The coroner says it was a heart attack, but Manning was in perfect health. So off they go to Aylmerton, where he had spent much time, to check things out. There they find quite a set of characters: the Reverend Ringer, a foe of superstition, and his wife, who wants the world to adhere to her wishes. A trio of sister living alone who have the reputation for being witches. Felix Ott, a fan of historic English folklore, was an associate of Mannings in their studies of the supernatural. There is a cunning man, who supplies men with Victorian Viagra. Even the landscape has a personality- the Shrieking Pits, prehistoric holes in the ground, are alleged to be haunted. Then a baby disappears.

Numerous plot strands and false leads make for entertaining reading, and an atmosphere of menace pervades the story. But Jesperson (male) uses Lane (female) as someone to glean information for him but doesn’t bother to tell her what he’s learned in return. He treats her somewhat as a useful servant. He also seems a bit full of himself. The use of a mixed gender team works well in the setting, though- while Lane cannot participate in certain goings on because of her sex, her femaleness allows her entrée into situations that Jesperson cannot enter: befriending the women who live in the Vicarage and spending time with the three possible witch sisters. The author has a good grasp of life in the Victorian era. Four stars out of five.