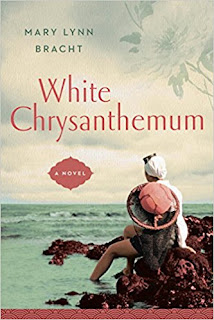 In 1943, sixteen year old Hana is happy with her life as a newly fledged haenyeo woman, free diving for abalone, urchins, oysters, and more in the waters of Jeju, a small island off by what is now South Korea. All her life, Korea has been under Japanese occupation. Her people are required to speak Japanese and obey the Japanese soldiers. It’s a hard life, but her family is happy.

Then one day as she is swimming in to the shore, she sees a Japanese soldier making his way down the beach, where her little sister sits, watching their catch, hidden by some large rocks. It’s only a matter of minutes before he discovers Emi, and young girls are frequently taken by the soldiers, taken to be ‘comfort women’ in military run brothels. Hana runs to the beach, allowing herself to be taken instead. Thus begins her life in hell; life as a sex slave, raped over and over again by Japanese soldiers in a tiny room from which she’s rarely allowed out of.

The story alternates point of views between Hana as she strives to find a way to escape, and Emi, in 2011, who has never forgotten her sister and has never stopped looking for her. Her life, too, has been miserable; Korea’s constant state of occupation and war has not made life easy for anyone. Now she comes to Seoul, to see her grown children and to attend a Wednesday Demonstration- the weekly protest aimed at getting justice from Japan for the sex slave business they were in. She comes, hoping against hope to see her sister. Her children have no idea that their aunt was a sex slave; it shocks them when Emi finally tells them.

The story is, frankly, horrific. But while this volume is fiction, these things really happened to the people of Korea- and the other countries that were under Japanese occupation during this period. The book is really hard to read, because of the subject matter and the verisimilitude of the scenes of sexual violence, but it’s so well written that I just couldn’t put it down. My heart ached for Hana, and for Emi, too. Excellent book, five stars, but could be very triggering for victims of sexual violence.