Everybody Had an Ocean: Music and Mayhem in 1960s Los Angeles, by William McKeen. Chicago Review Press, 2017 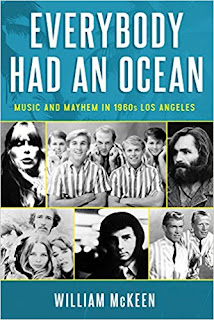 While this book covers the Los Angeles music scene of the 60s, the backbone of the book is the story of the Beach Boys. Beginning with their early teen days of using music to keep their brutal, abusive, father from beating them, to the days when they worked with Jan and Dean, and then the LA studio musicians that were known as the Wrecking Crew (a crew that included Glen Campbell and Leon Russell), the book takes side roads through music other than surf pop. The Greenwich Village folk scene that spawned Judy Collins, Bob Dylan, and Cass Elliot. The “race music” that black musicians were putting out, mainly in the south. The various permutations Crosby, Still, Nash and Young, including bands before, during, and after. Frank Sinatra, which rather baffled me, although he was producing music that got played on the rock stations (and a chapter on how his son was kidnapped). Phil Spector and his Wall of Sound. The sex and drugs. How Charles Manson drifted around in the music world, living in Dennis Wilson’s house with his who knows how many girls, and getting a recommendation from Neil Young (the producer passed). Through the various chapters, the story returns again and again to the Beach Boys. The final chapter updates us on what happened to all those people, ending, as it began, with Brian Wilson.

I picked this book up as being of just passing interest; I was never into the surf and car music of the early 60s. But I saw that it was about more than that, so I figured I’d give it a try. I ended up not being able to put it down. It seems like the entire rock music industry was interconnected. It’s well written, entertaining (albeit depressing a lot of the time, but that’s what happened), and apparently well researched. This isn’t a memoir from someone who was there; McKeen is a professor of journalism, so I assume he takes a neutral approach to the material. Five stars.

This in no way influenced my review.
Posted by Laurie Brown at 8:11 PM