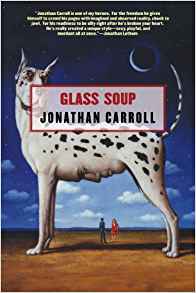 This book is a sequel to “White Apples”, which I did not know before I started reading. Apparently it doesn’t much matter; the gist of it is that Vincent and Isabelle fell in love, Vincent died, and Isabell did the whole Orpheus thing and went to the land of the dead and brought him back to life. “Glass Soup” takes place very shortly after that. Isabelle is pregnant, and her child is a very important one: the fate of the universe hinges on whether he is born in the land of the living or of the dead. This novel is Order fighting against Chaos, with Isabelle’s child representing Order.

The story actually starts when Simon Haden wakes up into a world where he is a tour guide (it takes place in Vienna). The bus is driven by an octopus; one passenger is made of butter; another is a really bored bag of caramels. A 6” tall man named Broximon hangs out with him. It turns out that AC/DC was right: there is literally a multilane highway to Hell. Simon, as he finally figures out, is dead. The afterlife is made of every single dream and nightmare a person has had in their life. Ugh.

The plot has various beings- one of them a shape-shifting, womanizing, serial killer- trying to get Isabelle on one side of life or death or the other. I really liked it, and I’m not even sure why. I disliked pretty much all the characters. But overall the book as fascinating. It’s a love story, and a story of friendships, despite God being a polar bear. Four stars out of five.

This did not influence my review.
Posted by Laurie Brown at 2:26 PM