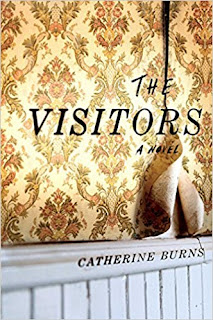 Fifty-ish Marion Zetland lives in a formerly fine house, now falling apart and filthy. Brought up by parents who considered her below contempt, her childhood was friendless and she was bullied both because of her weight and her slowness at learning things. Her brother was the shining light of the family, and she has spent her life deferring to him and being his servant. To say she’s mentally unhealthy would be putting it mildly. Brother John is no better; he never lived up to his childhood promise and spends most of his time in the basement, which is forbidden to Marion.

Marion has no hobbies or real interests; she soothes herself by eating, watching TV, and sleeping with her many stuffed animals. No one speaks to her (except on the rare occasion when someone wants something from her); it’s like she has been erased- or never existed at all. Meanwhile she knows something is going on in the basement- there is extra laundry for her to do, and she makes (horrible) meals for extra people.  And there are a few trips to ferry landing or bus station.. Then one day her brother has a heart attack, and is taken to the hospital. Now she must face what’s in the basement.

How Marion deals with her new freedom from John and her responsibility to the Visitors is both heartening and shocking. In the end I loathed Marion as much as I did John,
although I wondered how much responsibility could be laid at her door versus her parent’s.

The writing is very atmospheric. I could feel the claustrophobia in the falling down house, and the claustrophobic state of Marion’s own mind, always trying to efface herself and make people like her- or at least not denigrate her. It’s a very creepy book, although not what I thought it would be when I requested it. I expected supernatural horror; this was far more horrifying.

I received this book free from the Library Thing Early Reviewers program in return for an unbiased review.