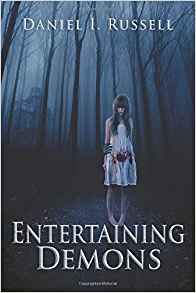 Fifteen year old Molly has problems most teens don’t. Her mother lives in a mental care facility, heavily sedated. The home she shares with her grandfather has been taken over by cameras and a crew, and her life is broadcast every week, on one of those reality shows about the supernatural. Why? The house is haunted. And the focus of the haunting is Molly.

She just wants to celebrate her 16th birthday with her friends, but they become alienated from her. People in town point and stare and whisper about her. And she can’t get enough sleep, because the haunt walks up and down the hall, rattling her door knob, and otherwise being a nuisance. Still.. It’s not so bad.

Then one night the door to her room bursts open. Things are flung off the shelves. And it starts touching her… in truly sickening ways. But they’ve already found that leaving the house doesn’t leave the haunt behind… and the contract with the TV company says she can’t quit anyway.

Molly’s grandfather seems oddly unconcerned about a lot of it, although he does blow up at times- usually at the film crew. The only one who seems truly on Molly’s side is Samuel, the huge parapsychologist who is the official investigator.

We’re not very far into the story before we are told that it’s not a ghost, but a demon, that’s after Molly. In fact, we are introduced to two more characters who are *also* demons. They have a big interest in the investigation.

The story is quite dark and gory. There is a lot of graphic torture. There is also a fair bit of satire. Not laugh out loud stuff, but a pretty pointed look at modern society. The tale is told pretty well, right up to the end and then it sort of falls apart a bit. I’d already figured out the cause of the haunting- the author drops a few clues, but not blatant ones- but I was not satisfied with the ending. Four stars, with a warning for over the top violence.

I got this book free from the Library Thing Early Readers program in return for an unbiased review.