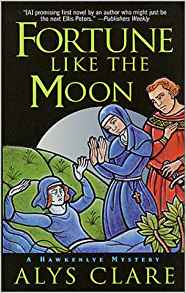 After the untimely death of his older brother, and then of his father, Henry II, Richard Plantagenet has inherited the throne of England. He thinks little of England; he’s lived in France most of his life. To celebrate his coming coronation, he orders the jails emptied. That turns out to be a poor idea, as many people figure this will result in a rise in crime. Soon, indeed, a rape/murder of a young nun, occurs, and Richard (not yet the Lion Hearted) sends an aide, the knight Josse d’Acquin, to investigate, hoping that the killer is not a former convict.

At the abbey, Josse and the Abbess Helewise set out to solve the murder- which turns into even more of a mystery when some new information from the abbey’s healer (and now medical examiner) comes to light. Then no sooner do they think they have that one solved when another novice is also found dead, with her throat neatly cut. Do they have a serial killer on their hands?

The story was complex enough to keep me interested, and I liked Sir Josse and Abbess Helewise- and liked how they worked together. The author has a good bit of knowledge as to the era she’s writing in, but.. the characters sometimes speak as if they belong to our time. While I don’t expect them to speak Middle English (heaven forbid), certain phrasings are just jolting. The book was a little light on characterization, but as this is the first of a series there is plenty of time to build on that (I think there is something like 15 in the series now). I did have to wonder about the ease with which nuns, and Sir Josse, came and went in the abbey. Were they really that open? Or did the right rules come later in time? I honestly don’t know. Anyway, an interesting, quick read. Four stars.