Bitter Winds: Book 3 in the Tales of the Scavenger’s Daughters, by Kay Bratt. Lake Union Publishing, 2014 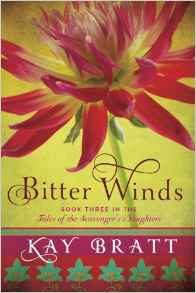 I wasn’t aware that “Bitter Winds” was the third in a series when I ordered it; it works as a standalone novel but I think would have made more sense if it had been read in order. The cast of characters is large, and I spent a good bit of time thinking “Now, who is this person again?!?” But the story concentrates mainly on four characters: Lily & Ivy, twin teenagers, Lily being a blind violinist and Ivy her guide through life; Li Jin, who runs the shelter they all live in and acts as chef; and Sami, Li Jin’s friend from a previous book, who has led a thoroughly horrible life up to this point.

Lily wants to make some money by playing her violin in public (which is classed as begging by the Chinese government). When the police make a sweep to remove all the beggars from a festival, Lily gets separated from her sister Ivy. By happenstance she is found holding a leaflet for the forbidden Falun Gong sect, which means imprisonment in a mental hospital and possibly a stay in a ‘reeducation camp’, which carry a huge fine, instead of immediate release with a small fine. Meanwhile, Sami gives birth. She’s far from a natural mother, and wants nothing to do with the child. She also does nothing to help around the shelter, which is a communal situation. Li Jin is overworked, spending a lot of time trying to come up with the money to get Lily released. It’s a tense time for them all, with Lily and Ivy in some very scary situations. The ending is a surprise; we are led to think one thing will happen and it’s the opposite. It’s a bit of a deus ex machina, and I wished the details had been spelled out, but it works.

Li Jin is almost too good to be real, although without having read the first two books I could be missing a lot. Sami actually turns out to be the most interesting person in the end. Lily and Ivy are fairly well fleshed out, but no one is really developed all that well. Once again, I could be missing a lot because of this being the first of the books I’ve read. I’m not totally sure if I’ll seek out the others; it was a nice read but not really gripping.

Neither of these things influenced my review.
Posted by Laurie Brown at 1:26 PM