Dear Friend, from My Life I Write to You in Your Life, by Yiyun Li. Random House, 2017 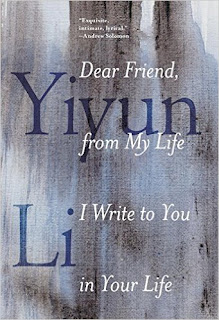 Li is an award winning fiction writer, but this is her first non-fiction work. It’s a memoir, written over two years that saw Li hospitalized for suicide attempts. While it jumps around in time a lot, it’s still obviously been smoothed out a lot because things flow well.

The author writes about her childhood in China during a time when free thought was not encouraged, with a mother who had significant mental issues of her own as a narcissist. She speaks of her decision to change from being a scientist with an assured income and green card, to being a writer. She tells us some about her stay in a mental hospital and about her feelings that took her there. Mostly, she writes about reading and writing, and the books and authors that have been important to her.

It’s a sad tale, mostly. But it engaged me and the prose is so well done that it sucked me in for hours.

I received this book free from the Amazon Vine program, in return for a fair review.

Neither of these things influenced my review.
Posted by Laurie Brown at 3:28 PM