Ghost Writer in the Sky, by Piers Anthony. Open Road, 2017 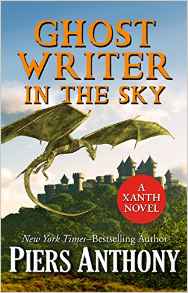 In the world of Xanth, there is a Night Colt who wishes to lead the Night Mares. But they are closely herded by the current Night Stallion. His only hope is to get practice spreading dreams, but how is he to do this given this situation? His solution is to enlist a human- a Mundane- who is a wannabe author with horrible writer’s block. The writer’s block continues, and the author finds himself reworking old fairy tales for the Night Colt to spread. Fine enough, except these dreams are involving Xanth people and forcing them to enact the dreams. Soon the princesses (it’s all about the princesses) join together, enlist a couple of Mundanes to aid them, and set out to stop the Night Colt. Soon they have three realities, uncountable members of their group, and everyone is in love, or at least lust, with each other.

“Ghost Writer” was the first Xanth novel I’d read. I suspect it’ll be the last. I had no idea what to expect; I thought it was just straight fantasy. As probably everyone but me knows, the Xanth novels are pun heavy. Which is just fine; I love puns. But the author saw fit to frequently *point out the puns*. Which kind of takes the joy out of them.
The other thing that bothered me was some of the sexual things. Not that sex happens in a book that seems to be written for the YA crowd; it’s the *kind* of sex. Mainly that characters borrow other character’s bodies to have sex. Okay, it mostly consensual, but it’s still kind of creepy. Then there is the one character who is suicidal and sees no way out of her lot in life who agrees to have her body used by someone to have sex, as a way of bribing the Ghost Writer into stopping his shenanigans. I’m not sure I can call it completely consensual when she sees no alternative but death! And then there is the whole odd business of grown men being stunned by the sight of women’s underwear, and the Ghost Writer’s scenario of a princess having to pee while being watched, with the stress being that men will enjoy seeing this…. I have to admit to being a fan of bathroom humor but this was just juvenile. Really juvenile.

I’m afraid I had to really force myself to finish this one – I got it from the Vine program, so I was obliged to finish it- and it left me feeling that I’d lost time from my life that could have been better spent on something else.

Neither of these things influenced my review.
Posted by Laurie Brown at 3:57 PM