What Lies Beyond the Stars, by Michael Goorjian. Hay House, Inc. 2016 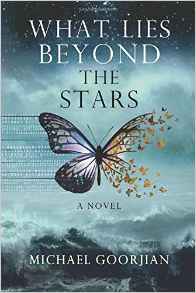 Adam Sheppard lives in the Bay Area and writes code for games. He works with his ‘friend’ Blake; their company has skyrocketed to the top, and has been acquired by the near mythical Rene Adiklein. They work near the top of the tallest building in San Francisco, which has a mysterious pyramid on top. But no one stays on the top for long if they don’t keep innovating; the pressure on Adam to fix bugs and create new things is tremendous. He lives in a gated community with a wife who runs his life and two step children who don’t give a shit about him. He is not engaged with a single part of his life. The only thing Adam does that really interests him is rereading a used book the homeless man who sits by the back entrance to Adam’s workplace sold him. He’s a genius, possibly autistic, and ever since he was 6 has been treated as mentally ill and heavily medicated.

Blake is both his care taker and his exploiter; Blake and Adam’s wife both treat him as property to be put into captivity and made to obey and provide for them financially. So when one day he leaves a note saying he can’t go on, withdraws as much cash as the ATMs will allow him, and disappears, they panic. As does the doctor who has been treating Adam since he was six. Adam doesn’t realize this; he’s gone back to the area he spent some time in before he was 6. He doesn’t really know why he has gone there, but a chance encounter with a woman in the dark convinces him he’s run into his childhood friend Beatrice. After a short blissful encounter, the police capture him and turn him back over to Blake, Jane, and the doctor, who once again over medicates him.

This Kafkaesque story is part novel and part philosophical treatise. Adam is trapped by his life of working and doing the family thing that he is ‘supposed’ to do. He is trapped more thoroughly than most of us- most of us don’t have someone making sure we take our meds- but we are pretty much all in that same trap. The question is, can Adam escape and join Beatrice and her group, who hope to save mankind before it’s too late? Can he find happiness and live fully, rather than as someone drugged into fitting in?

The basic theme of the book is of course how we are all being drugged by input- TV, video games, social networking- that keeps us from living fully and meaningfully. Adam finds that he must live in the moment, not in distractions. This message is nothing new; it’s fundamental to Buddhism. It is the first time I’ve found the message clothed in social networking, on line ads, and psych meds. Other than Adam, none of the characters is ‘real’ seeming; they are more symbol or archetype than they are people. I found that disappointing; making Jane and Blake flat caricatures seemed to fit the story but it seemed like Beatrice and her father should have been fleshed out. While I couldn’t put the book down while reading it, once I was done, I felt somewhat let down. I wanted to know more about Jane’s father, Adiklein, and Michael the homeless man. Will there be a sequel, or are they meant to be mere symbols like Jane and Blake? I wish I knew.

Neither of these things influenced my review.
Posted by Laurie Brown at 3:32 PM