Everything Belongs to Us, by Yoojin Grace Wuertz. Random House, 2017 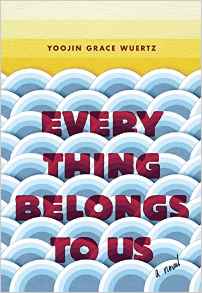 Sunam, Jisun, and Namin are all students at the prestigious Seoul National University, but that’s pretty much all they have in common. Namin comes from a poor family, where both parents and her older sister all work to put Namin through college. She wants to become a doctor to lift her family out of poverty.  Sunam comes from a middle class family, and is trying to make connections with rich people to ease his way into the world of business. He, too, is the only child in the family to go to university. Jisun comes from an insanely wealthy family; her father assumes she will take over his business when the time comes. But, despite her life of privilege, she is obsessed with the rights of the working poor.

Odd a group as they seem, they become friends- and more. Their relationships are not easy ones; it’s hard to overcome the barriers of money and class- and what their families expect of them. This is their coming of age story.

Set in South Korea in 1978, it’s a time of great change politically and economically. Unions are forming, protests are being staged, and state police are cracking down on activists. The story shows how these pressures affect the characters and their families, and on one level it’s a really good social novel. But it devolves into a soap opera situation and never really recovers from that.

I liked the characters of Namin and Jisun (although I didn’t like some of the choices Jisun made; on the other hand, I applauded one thing she did), but disliked Sunam. Or, rather than dislike, I didn’t feel anything for him- he doesn’t have much personality. The ending left me wanting something more- the three main characters ended up just as one expects from the story, and it’s so abrupt that I felt like the author wanted to tie it up as quickly as possible. I’d give three and a half stars if I could.

I received this book free from the Amazon Vine early reviewers program in return for an unbiased review.