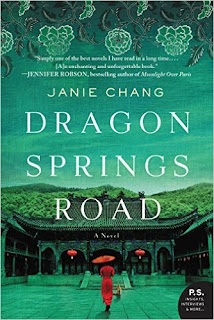 Seven year old Jialing is not worried at first when her mother leaves her alone in their home, telling her she’ll be back in three days. It’s far from the first time her mother has left her alone for a few days, when she goes to spend time with Noble Uncle. Jialing is pretty safe; a resident Fox spirit looks after her when her mother is gone. But this time her mother doesn’t come back. When new people move into the main house, Fox tells her to step out of hiding and speak to the new girl who is out in the yard. She finds herself taken in by Grandmother Yang as a bond servant, a person who can purchase their freedom. By luck, she gets to go to school and learn English. But still not much is hoped for her. She is zazhong- half white. She will be welcomed by neither whites nor Chinese.

The tale starts in 1908 and goes to 1920. In that short time, Jialing goes through many changes, as does China. She tries for jobs, she searches for her long missing mother, she learns the true social cost of being biracial in that time and place, she comes to the attention of gangsters. Her path is not an easy one, and she has to make hard choices. Jialing is a great character; she’s smart and strong, but also flawed.

Told in first person by Jialing, it’s a beautiful book, even though many of the things that happen are far from pretty. The phrasing, the descriptions, and the characters- they are nearly luminous. There is magical realism used throughout the book- not just Fox (my favorite character), but a now and then gate to the immortals. I recommend this book.

Neither of these things influenced my review.
Posted by Laurie Brown at 12:41 PM