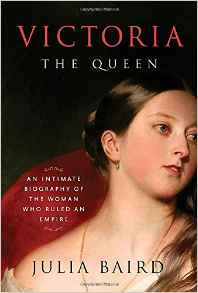 To write this new biography of Queen Victoria, Baird got unprecedented access to Royal Archives. Victoria’s daughter, Beatrice, had been left with the job of expurgating Victoria’s journals and letters and she did quite a hatchet job on them, removing anything that might cause her mother to be seen in a less than perfect light. What she didn’t realize was that someone at the Archives took a photo of each page, preserving Victoria’s words. Baird was given access to this treasure trove. This allows us to see the dichotomy that Victoria lived with in more detail than in the past; women of her day were supposed to be meek and submissive, while she ruled the biggest empire England ever had. Wives were supposed to obey their husbands, but her husband was consort and prince only and not the king. Women were pretty much seen as being sexless, while Victoria had a strong libido and enjoyed having sex (the Victorian era’s extreme sexual modesty actually came from Prince Albert, not Victoria). Women were supposed to be natural mothers; she hated being pregnant and was ambivalent about children.  She was the supreme ruler of the Empire, but didn’t believe women should be able to vote.

Most of the book is, of course, nothing new. Her reign has been well documented already. Baird’s writing style leaves something to be desired- she will be writing about one subject, then take off on a tangent like a dog going “Squirrel!”. Some things are out of chronological order, which is confusing. But I found the book mostly very interesting (I really had little interest in the details of her dealings with Parliament), despite already knowing a fair bit about Victoria. Don’t expect anything earthshaking, but rather a portrait of a complex woman about whom many myths have been woven.