Things We Have in Common, by Tasha Kavanagh. Mira, 2017 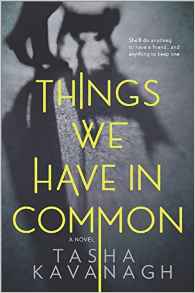 When Yasmin Laksaris’s father died five years previous to the story, her life spiraled out of control. We are given no clue as to what her life was like previous to this, other than that she and her father were close. Since then, food has become her only source of comfort. Her mother is not close to her and has remarried, to a man who seems to barely tolerate Yasmin. Now she’s obese, and the students, teachers, and principle of her school all treat her like a total outcast. She takes endless taunting. When her not very subtle stalkerish behavior towards the most popular girl in school becomes obvious, the taunting gets even more vicious. But it doesn’t stop her from endlessly watching pretty, blonde, Alice.

Then one day she discovers that she’s not the only one watching Alice. Sitting outside during lunch, she notices that a man walking a dog is watching Alice intently. She intuits somehow that this man means harm to Alice. But rather than reporting the man to the school, she decides to figure out who he is. Because she doesn’t want to stop him from abducting Alice; she wants to be the one who rescues Alice once she’s abducted, figuring that Alice will then return her love. So Yasmin plays junior detective, and, amazingly, finds the man. She manages to work her way into his life- which he responds to rather oddly- and when Alice really does go missing, Yasmin turns her stalking to him.

The author has captured the feelings of a teen outcast pretty well. She’s so desperate for affection that even the slightest imagined (and she imagines a LOT- she is, in fact, delusional) favor shown by the man changes her life. The book is written as if Yasmin is telling the story to the man, and it gives us a deep look into her mind. Yasmin is, quite frankly, not a very sympathetic character. In some ways, she is- anyone bullied as much as she is would be- but she has a very warped mind. The story is built such that you could see it going in several directions. I couldn’t put the book down, dying to see which way it would go. The end is positively Hitchcockian.

Neither of these things influenced my review.
Posted by Laurie Brown at 2:22 PM