The Last Days of Magic, by Mark Tompkins. Viking, 2016 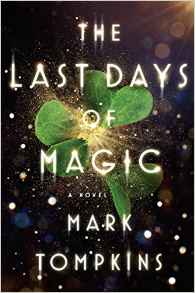 This book was advertised as utilizing both all the supernatural beings of the Celtic world and the ones from the Bible; that intrigued me. A tale that combines the Dead Sea Scrolls, Vikings, a Celtic goddess, and Vatican scheming? Sign me up. The fact that it takes place in both the present day and in the late 1300s made it even more interesting to me.

The story begins in 2016, when Sara Hill is contacted by her grandmother. Telling Sara that they are both in danger, she instructs her to cut open some old books. Hidden inside the covers are complete copies of the Dead Sea Scrolls- including the books that the Vatican has destroyed because they don’t fit with their philosophy. She tells Sara that she must come to Ireland immediately.

From those half dozen pages the story jumps to 1387. The story revolves around twin girls who are born periodically in Ireland who are half goddess, and a plot that combines the Vatican’s wish to erase all magical beings and the English king’s desire to rule Ireland. The next 360 pages are about the training the girls have, the scheming of the various kings and nobles, a marshal from the Vatican who isn’t quite what the Vatican thinks he is, witches in royal households, and lots of battles, big and small. The author goes into great detail about all of these things- sometimes a little too much detail and the story bogs down. The cast of characters is huge- at times I had trouble remembering who was who- and lot of them didn’t get enough stage time to let us get to know them; they enter, speak their piece, and leave. The ending left me completely hanging; this is pretty obviously going to have a sequel or two. We only got the story in the past; we have less than a dozen pages of the present day story. While we find out that all the supernatural races are descendants of the angels who came to earth and mated with humans, we don’t find out why this is so important that anyone who finds this out is in danger.

In the end, while the story interested me and I liked the writing, it badly needs some editing. The story seemed to get away from the author.

Neither of these things influenced my review.
Posted by Laurie Brown at 11:59 AM