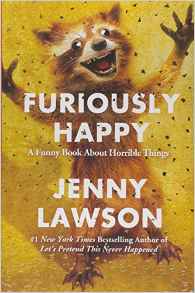 I think Jenny Lawson is probably the funniest woman on earth, so I was delighted when she announced that she had a new book coming out. I was on the library’s ‘hold’ list for it before it was even published.

While this book is nominally about Lawson’s battle with mental illness (depression, anxiety, some self-harming issues), the serious chapters are interspersed with the sort of manic ridiculousness that is featured on her blog. Things like going to Australia with her koala costume so she could wear it while holding a koala (which ended up not happening), having a bag full of dead cats, and the conversations she has with Victor, her straight man husband who apparently is either very patient or takes a lot of tranquilizers.

But I have to say, unlike a number of reviewers, I found the chapters on her mental illness struggles funny, too. Not in the point-and-laugh sort of way, but in the “oh, yes, I have TOTALLY had that conversation/anxiety attack/mortifying event!!” way. Because while everyone’s mental illness is peculiar to themselves, there are some traits we all tend to have and can identify with. And somehow knowing that this woman has done the things she has makes me feel normal. Sort of.

The title, ‘Furiously Happy’, comes from her way of dealing with life. She knows that she will continue to have a lot of bad days, whether they be from depression or anxiety. So on her good or even so-so days, she tries to make the most of it and be furiously happy, not just cruise on auto-pilot. And that seems like  a pretty good plan.

The above is an affiliate link. If you click through and buy something- anything- Amazon will give me a few cents. This in no way influenced my review.
Posted by Laurie Brown at 1:31 PM